The Farewell by Tissot

"So that’s how we live our lives. No matter how deep and fatal the loss, no matter how important the thing that's stolen from us - that's snatched right out of our hands - even if we are left completely changed, with only the outer layer of skin from before, we continue to play out our lives this way, in silence. We draw ever nearer to the end of our allotted span of time, bidding it farewell as it trails off behind. Repeating, often adroitly, the endless deeds of the everyday. Leaving behind a feeling of insurmountable emptiness... Maybe, in some distant place, everything is already, quietly, lost. Or at least there exists a silent place where everything can disappear, melting together in a single, overlapping figure. And as we live our lives we discover - drawing toward us the thin threads attached to each - what has been lost. I closed my eyes and tried to bring to mind as many beautiful lost things as I could. Drawing them closer, holding on to them. Knowing all the while that their lives are fleeting." 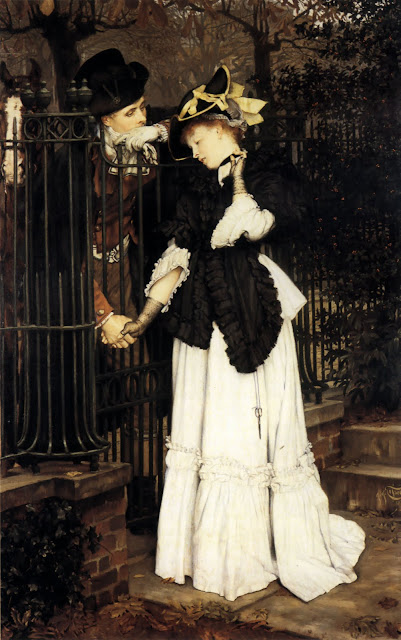 About Tissot
Tissot is famous for his exquisite paintings of beautiful English women and most people think he was English. In fact Jacques-Joseph Tissot was born in Nantes (1836), then a thriving port on the Loire estuary in western France. He adopted the name James as an anglicised form when living in England.
His friends were Manet and Degas, with whom he shared a teacher in the painting school in Paris. Not a lot is known of his personal life except that around 1876 a mysterious attractive lady begins to appear in his pictures. Her identity remained a mystery until well into this century. Her name was Kathleen Newton, Kelly. Her father, an Irish army officer, arranged the marriage of his convent-educated daughter when she was only 17, sending her off to India to marry a certain Isaac Newton, a surgeon in the Indian Civil Service. On the ship, however, she fell in love with a Captain Palliser, but only confessed this to Newton after their wedding on 3rd of January 1871. Newton's response was to divorce her immediately.
Decree nisi was granted on the 20th December the same year. Kathleen had returned to England by then and on the same day gave birth to her daughter by Captain Palliser. It is  not known exactly when or where Tissot met and fell in love with her, but it is knwon that in March 1871 she gave birth to another child, believed to be Tissot's son. This was regarded as scandalous behaviour in those days and was kept secret by Kathleen's family.
In 1876 Kathleen Newton and her two children moved into Tissot's house and remained there until her death from consumption in 1882. She was only 28. For Tissot, the time spent with Kathleen was the happiest period in his life, and one which he was to look back on longingly for the rest of his days.
Finding the thought of life in London intolerable without her, he decided to leave at once. Within only five days of her death he abandoned the house, leaving his paints, brushes and some unfinished canvases behind him, and returned to Paris.
Posted by Miky at 22:54