Munch was only 29 when he painted The Scream, but he was already burdened with tragedy and loss. His Oslo childhood had been deeply unhappy from the moment his mother died when he was five. His father terrorized the five children taking every word of the Bible as a literal truth and convincing them that any misbehaviour would be condemned to everlasting flames.

"Sickness, insanity and death with the black angels that kept watch over my cradle had since followed me all my life. At early age I was told about the miseries of life on this Earth, about life after death and also about the agonies of hell suffered by the children who sinned.."

Munch survived, but his sisters and brother slowly deteriorated around him. His favourite sister Sophie died when he was fourteen and Lora was diagnosed with melancholia. Munch himself suffered prolonged periods of sickness and depression bordering on mental illness.

From young age he was obsessed with drawing and by 1880 he decided to be a painter. His home was still in Christiania, not yet a capital city and in many ways just a provincial town. It was very puritanical society and very severe, but against that there was developing a bohemian group led by the novelist Hans Jaeger and he had proclaimed a commandment to young artists, poets, novelists that you should write your own life.
This message was taken by the group as gospel.
Munch threw himself into the dissolute life of Christiania artists, but never quite joined in Hans Jaeger revolutionary idea of free love.

The experimental relationship Jaeger encourage made the various love triangles existing within the group. Munch was involved with a married woman, Millie Thaulow. She was his first big love affair, but Munch was constantly wrapped by guilt and jealousy. The anguish of the affair became essential part of his paintings.

In the work Evening on Karl Johan made one year before The Scream, the figure in the left represents Munch roaming the streets of Oslo hoping to catch a glimpse of Millie Thaulow, the staring faces are indifferent to him. His relationship with her ended bitterly and she took up with someone else, leaving Munch heartbroken.

The same year his affair ended, he had to face the trauma of his father's death. The disciplinary father that petrified the infant Munch had also deplored his adult career as well, and yet his death was a terrible blow.

Posted by Miky at 23:15 No comments: Links to this post

The Scream by Edvard Munch Part I 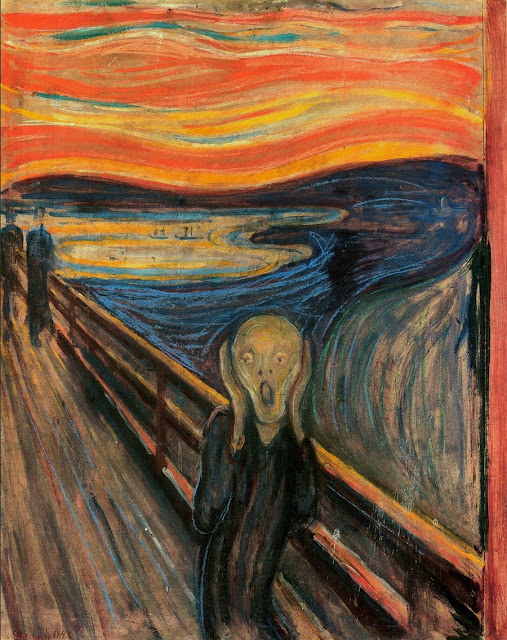 Why people love this image so much ? It is weird, because it is a nightmare picture. It is a genuinely disturbing picture, and yet, people love it.
It is like an icon of fear, it is a compulsive image, easy for anybody in the world to relate to the theme.

The Scream by Edvard Munch is one of the world most recognizable images, more widely reproduced around the world than the Mona Lisa. This is not a painting anymore, it is an idea that entered our psych like a virus through the popular culture. 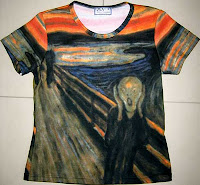 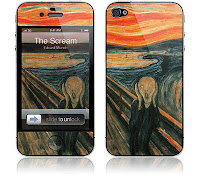 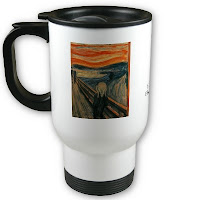 The Scream is an Expressionist painting, to understand how this work became an icon of the 21 century, we need to return to the life that Munch's masterpiece used to lead before The Scream began to take on a life of its own.

There are 105 versions of The Scream, the original version is the one from 1893 hanging in the Oslo National Gallery. Hundred versions are prints and five are paintings.
The idea behind the painting consumed Munch, he was obsessed by it, he endlessly reworked and copied it. People screaming had been included in pictures before, but he painted the bare fact of the scream and that was new.

The idea of painting a scream is paradoxical idea, as a painting is silent by definition. The scream is a painting supposed to emit a sound. Who would paint a sound at that time ?

But who or what was screaming ? It sounds like a silly question, surely is a tortured figure crying out in anguish. But that was not the notion of the obsessed Munch.
Interpreting The Scream, we must ask where the scream is emanating from, is it coming from the figure itself ? Or is it coming from the oppressive environment, therefore the figure is paralyzed in front of the horror of the scene, is the enormity of the pain and the lack of ability to in fact express the intensity of the internal state.
The sound is not coming from the little figure's mouth, it is the sound of the landscape, everything else is screaming, but the little figure has no voice.
The idea of the landscape screaming comes from Munch's real life experience recorded in Munch's diary in 1892.

" I was walking along a road with two friends, the sun set, I felt a tinge of melancholy, suddenly the sky became a bloody red, I stopped, leaned against the railing dead tired and I looked at the flaming clouds that hung like  blood in the sword of the blue-black fjord and the city, my friends walked on, I stood there trembling with fright and I felt a loud unending scream piercing nature. "

In recreating that feeling Munch places the figure  in the very spot where he experienced it, the landscape is not at all imaginary, it is a site in Oslo then known as Christiania, where that terrible feeling overtook him. The background landscape is loaded with meaning, for one thing this is a famous spot in Oslo, the traditional vantage point for artists to portrait the city. Munch included recognizable landmarks, the fjord and the old church.

The figure seems to be standing on a bridge or a pier, but it is actually an old road outside of the city skirting a cliff. For Munch this place vibrated with painful memories. It was a scruffy spot on the wrong side of Oslo and the scene of many suicides. In 1983 one of Munch's close friends shot himself in the woods just below. There is also the Oslo hospital, then used as an asylum for women. At the very time Munch began to work on The Scream painting, his sister was hospitalized suffering from maniac depression. It was said that from the spot he could hear the sound of the insane women. There were also slaughter houses in the base of the cliff.

So that day as he walked with his friends all the sorrow of his life had overwhelmed him. A beautiful sunset became something dizzying and frightful.

Posted by Miky at 01:20 No comments: Links to this post

Soon to be forgotten ... 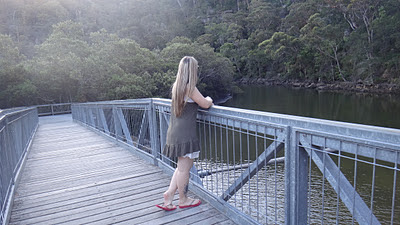 Posted by Miky at 23:28 No comments: Links to this post

"This is another paradox, that many of the most important impressions and thoughts in a person's life are ones that flash through your head so fast that fast isn't even the right word, they seem totally different from or outside of the regular sequential clock time we all live by, and they have so little relation to the sort of linear, one-word-after-another word English we all communicate with each other with that it could easily take a whole lifetime just to spell out the contents of one split-second's flash of thoughts and connections, etc. -- and yet we all seem to go around trying to use English (or whatever language our native country happens to use, it goes without saying) to try to convey to other people what we're thinking and to find out what they're thinking, when in fact deep down everybody knows it's a charade and they're just going through the motions. What goes on inside is just too fast and huge and all interconnected for words to do more than barely sketch the outlines of at most one tiny part of it at any given instant." 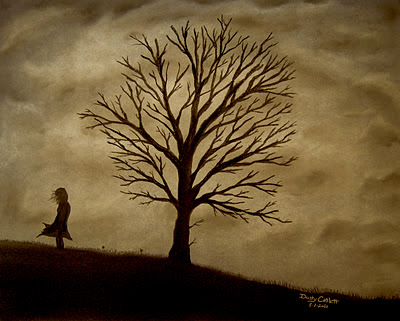 Posted by Miky at 23:56 No comments: Links to this post

"She was starting to think there might be such a thing as karma - that repetition - maybe you lived through the same thing over and over until you stopped caring. Maybe eventually it got less intense, until it was just nothing."

Therion - Wand of Abaris
Posted by Miky at 21:26 No comments: Links to this post

"I mean, if you were to find a shattered mirror, find all the pieces, all the shards and all the tiny chips, and have whatever skill and patience it took to put all that broken glass back together so that it was complete once again, the restored mirror would still be spiderwebbed with cracks, it would still be a useless glued version of its former self, which could show only fragmented reflections of anyone looking into it. Some things are beyond repair. "

Posted by Miky at 23:50 No comments: Links to this post

First day of a missing soul ...

"You can exist without your soul, you know, as long as your brain and heart are still working. But you'll have no sense of self anymore, no memory, no....anything. There's no chance at all of recovery. You'll just exist. As an empty shell."

Posted by Miky at 23:26 No comments: Links to this post