Nobody knows what is under my skin ...

"We do not grow absolutely, chronologically. We grow sometimes in one dimension, and not in another; unevenly. We grow partially. We are relative. We are mature in one realm, childish in another. The past, present, and future mingle and pull us backward, forward, or fix us in the present. We are made up of layers, cells, constellations."
Posted by Miky at 22:52 No comments: Links to this post

Shiva Nataraja - The dance of destruction 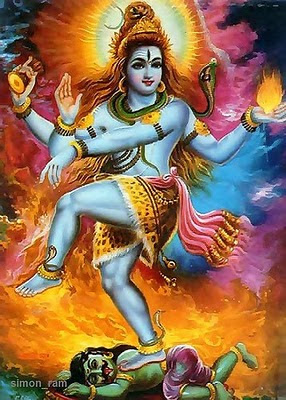 Nataraja , the dancing form of Lord Shiva, is a symbolic synthesis of the most important aspects of Hinduism, and the summary of the central tenets of this religion. The term 'Nataraj' means 'King of Dancers'.

Nataraja is shown with four hands that represent the cardinal directions. He is dancing, with his left foot elegantly raised and the right foot on a prostrate figure', the personification of illusion and ignorance over whom Shiva triumphs. The upper left hand holds a flame, the lower left hand points down to the dwarf, who is shown holding a cobra. The upper right hand holds an hourglass drum that stands for the male-female vital principle, the lower shows the gesture of assertion: "Be without fear."

Snakes that stand for egotism, are seen uncoiling from his arms, legs, and hair, which is braided and bejeweled. His matted locks are whirling as he dances within an arch of flames representing the endless cycle of birth and death. On his head is a skull, which symbolizes his conquest over death. His third eye is symbolic of his omniscience, insight, and enlightenment. The whole idol rests on a lotus pedestal, the symbol of the creative forces of the universe.

The dance symbolizes the cosmic cycles of creation and destruction, as well as the daily rhythm of birth and death. The dance is a pictorial allegory of the five principle manifestations of eternal energy — creation, destruction, preservation, salvation, and illusion. One hand destroys, the other will rebuild ...

What it really means ... 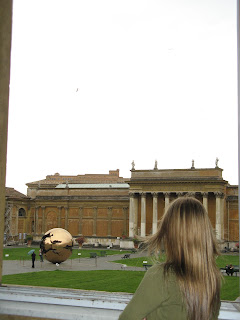 Posted by Miky at 22:59 No comments: Links to this post

"We are ignorant of the beyond, because this ignorance is the condition of our own life. Just as ice cannot know fire except by melting and vanishing." 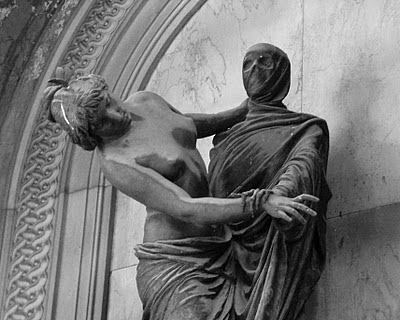 Dancing with death, life is represented by a woman, reluctant she tries to escape, but here death is triumphant ...
Staglieno is not just a cemetery, it is also an art memorial. The cemetery became more famous because of the quality of its art than the people who were buried there. After its opening to the public in 1851, the Ligurian aristocracy of the era competed in outdoing one another’s self-glorification by commissioning sculptures of themselves in hyper-realist detail. Their vain legacy represents the model of taste and behavior of the ruling classes of the time. 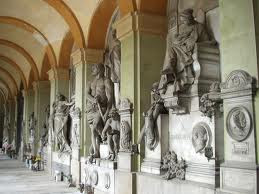 The art of the cemetery is closely tied with the emergence of the Realist art movement in the 1850s. 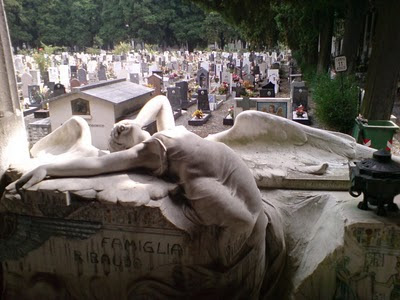 Goodbye on the Mersey by James Jacques Joseph Tissot

“So many faces in and out of my life. Some will last, some will be just now and then. Life is a series of hellos and goodbyes. I'm afraid it's time for goodbye again.” 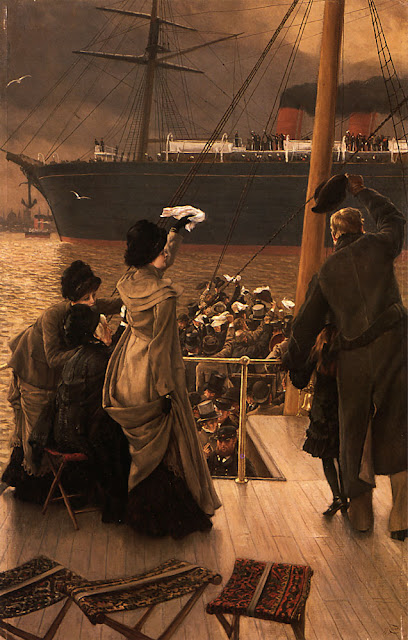 Posted by Miky at 21:54 No comments: Links to this post

“Between the covers of the books that no one had ever read again, in the old parchments damaged by dampness, a livid flower had prospered, and in the air that had been the purest and brightest in the house an unbearable smell of rotten memories floated.”
Gabriel Garcia Marquez 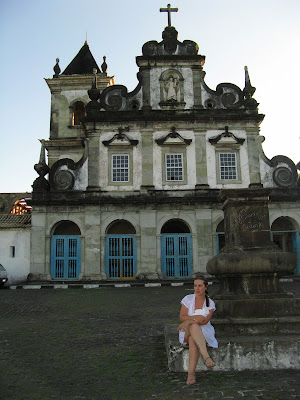 Cairu - Bahia / Brazil
Posted by Miky at 23:06 No comments: Links to this post

The best of Cuba! It goes well with a glass of whisky, a good cigar and a little bit of dancing ...

Posted by Miky at 22:26 No comments: Links to this post

The Black Swan Theory refers to a large-impact, hard-to-predict, and rare event beyond the realm of normal expectations. The term black swan comes from the accepted idea for thousands of years that all swans were white. A black swan had never been seen so it was accepted that they did not exist. But when a black swan was discovered in Perth, Western Australia, it completely challenged existing thought and so the “black swan” became a metaphor for when something unthinkable, unexpected and unpredictable occurs. 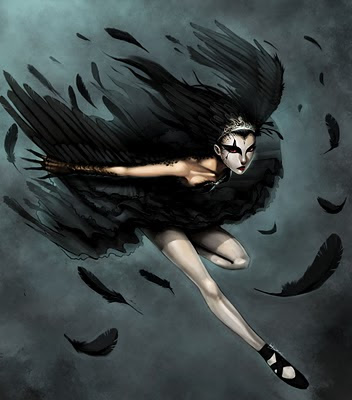 Posted by Miky at 22:01 No comments: Links to this post 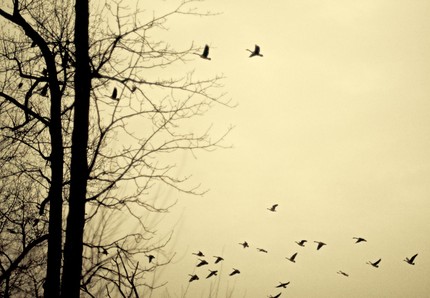 “Do everything. Love as much as you can, it may hurt but it helps us grow. Give all you have...you may be poor but you will be content. Always forgive....your heart cannot afford not to. Teach what you know and learn what you don't know. Stay open to all." 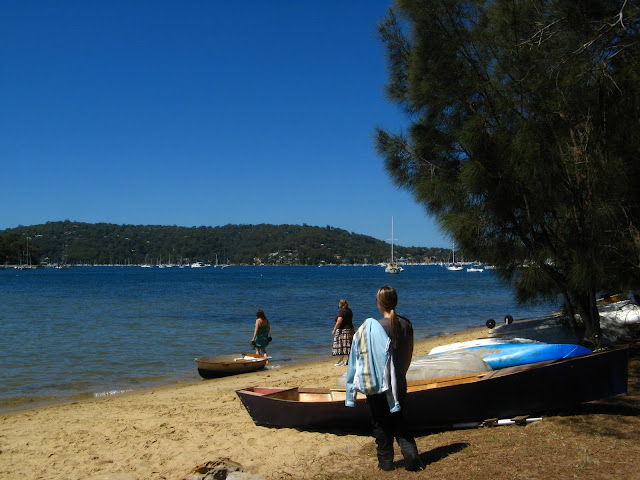 Posted by Miky at 21:54 No comments: Links to this post

The Snake And The Moon by Dead Can Dance

“I'm becoming more and more myself with time. I guess that's what grace is. The refinement of your soul through time.”
Posted by Miky at 21:49 No comments: Links to this post

Time is a Lion by Joe Henry

“The past is a ghost, the future a dream, and all we ever have is now.”
Posted by Miky at 22:01 No comments: Links to this post 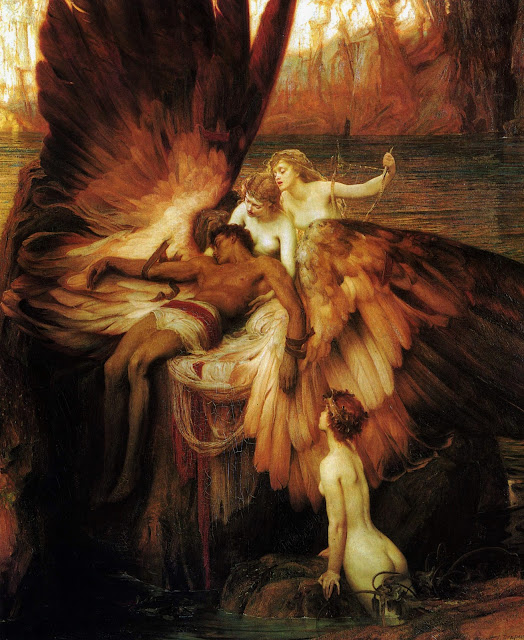 The Myth of Icarus

Daedalus and his son Icarus were imprisoned inside a massive labyrinth in Crete. The father made them each a pair of wings, and with these they were able to escape. Daedalus warned his son, “Don’t fly too high or the sun will melt the wax on your wings and you will fall. Follow me closely. Do not set your own course.” But Icarus became so exhilarated by his ability to fly, he forgot the warning and followed his own course instead.
He flew too high, the wax melted, and Icarus fell down into the sea and drowned.
Posted by Miky at 20:43 No comments: Links to this post

If I Could by Seal

“Each one has to find their peace from within. And peace to be real must be unaffected by outside circumstances.” 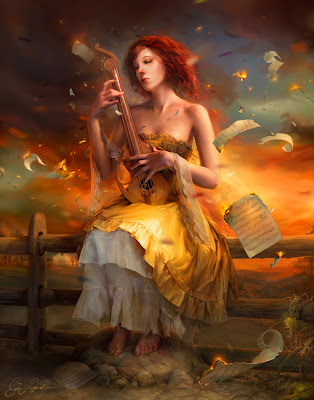 Posted by Miky at 22:46 No comments: Links to this post

Waiting for the cure ...

“Science may have found a cure for most evils, but it has found no remedy for the worst of them all - the apathy of human beings.” 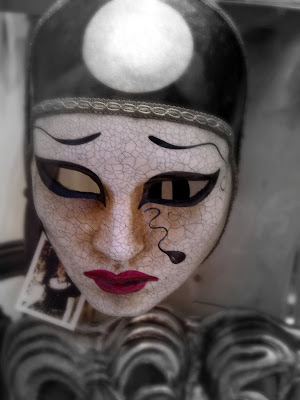 Posted by Miky at 22:56 No comments: Links to this post

"Our minds are finite, and yet even in these circumstances of finitude we are surrounded by possibilities that are infinite, and the purpose of life is to grasp as much as we can out of that infinitude.”


Carmina Burana - O Fortuna
Posted by Miky at 21:56 No comments: Links to this post 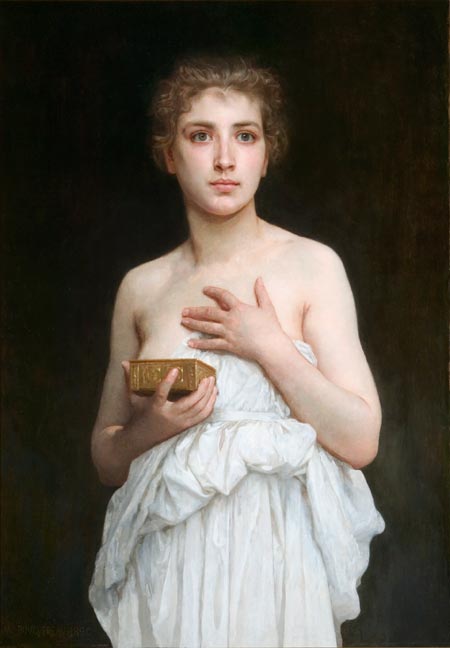 Bouguereau was a French painter, teacher, frescoist & draftsman. Born 1825- died 1905. The exact date when this picture was painted is not known, some believe it was painted around 1882. This canvas is part of a private collection.
About Pandora's box myth
Prometheus was a Titan who really liked humans. He helped them in any way he could. When he saw them shivering at night and eating raw meat, he knew they needed fire. But the gods did not allow man to have fire. They knew that man would misuse it and destroy with it. Prometheus was sure that the good man did with fire would outweigh the bad, so he stole fire from the gods and gave it to man. Zeus decided to punish Prometheus with trickery. He called Aphrodite to pose while Hephaestus made a clay figure of a woman. Then he brought the statue to life. The gods granted the woman with many gifts including beauty, charm, cunning, wit, eloquence, deceit, skill, and curiosity. Then Zeus gave her a box and told her she was never to open it. Zeus then offered Pandora as a wife to Prometheus.
The Titan wanted her, but he refused because he knew it must be a trick of the gods. Zeus became angry and punished Prometheus. The Titan was chained to a rock. There, a vulture came daily to feed on his flesh. Prometheus's brother, Epimetheus, accepted Pandora as his wife, and the couple settled down for a happy life. But Pandora always wondered what was in the box Zeus gave her. Finally she couldn't hold her curiosity down anymore. She opened the box, and from it flew hate, anger, sickness, poverty, and every bad thing in the world. She slammed the lid down and managed to trap the final evil still in the box: hopelessness. So today, even when things don't go well, every human still has hope.
Posted by Miky at 23:13 No comments: Links to this post

“Everything in life is connected somehow. You may have to dig deep to find it but it is there. Everything is the same even though it is different. Somehow everything connects back with your life. The faces in certain places may be different, but the situation is the same. Irony is a hidden factor that creeps around us in life, letting its presence felt only after it has left. Picture back to an year ago and the situation you were in. Look at how things are different and yet somehow everything is still in some way cognate. Everything connects together to form the balance of life, to maintain structure. Change is and will always be inevitable, but everything is relative, and all the moments and times in your life will come back around again, you just might find yourself on the other side of the coin. Things are always changing, as fast as everything stays the same.”

Sometimes words are not necessary ...

Posted by Miky at 17:58 No comments: Links to this post

"Resentment is like taking poison and wait for the other person to die." 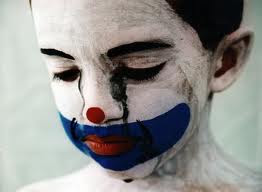 Posted by Miky at 23:15 No comments: Links to this post

The incredulity of Saint Thomas by Caravaggio 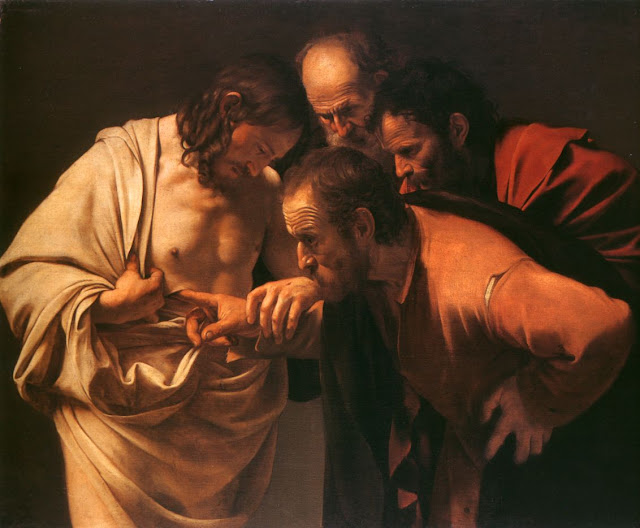 This picture was painted by Caravaggio around 1601 and it is currently located at Sanssouci of Potsdam, Germany.
Thomas was one of Jesus' twelve apostles. When Jesus shows himself to his followers after his resurrection, Thomas refuses to believe that this man really is his master. He demands evidence. Jesus shows him the wound caused by a Roman soldier's lance before his crucifixion. He invites Thomas to put his finger on it. Caravaggio shows that Thomas soon casts aside all doubt.
This is one of my favourite paintings, it carries a very interesting message that not too many would be able to understand ... it is not a painting just to be seen ... you have to feel it ... and I feel it so much that every time I look at it this voice inside of me shouts I BELIEVE, I BELIEVE !
"Truth will always be truth, regardless of the lack of understanding, disbelief or ignorance."
Posted by Miky at 22:03 No comments: Links to this post

Metallica - Mamma Said
Posted by Miky at 22:32 No comments: Links to this post