The allegory of lust - Venus, Cupid, Folly and Time by Agnolo Bronzino 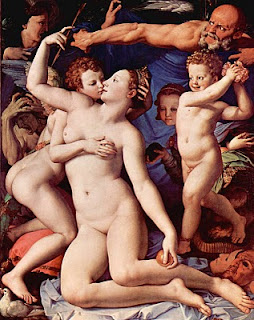 The allegory of lust “Venus, Cupid, Time and Folly” was painted in 1545. This work is about a rebarbatively frigid eroticism. It was designed as a puzzle, and incorporates symbols and devices from the worlds of mythology and emblematic imagery.
The attention to silky textures, jewels, and masks is consistent with Bronzino's courtly, aristocratic patronage. The figure of Venus appears as a precious object in a luxurious setting, perversely seductive by virtue of her very unapproachability.
Crowded into a compressed foreground space of the airless setting are several figures whose identities and purpose have been the subject of extensive scholarly discussion. The painting appears to be about lust, fraud, and envy. It has also been called a "Triumph of Venus". Its meaning, however, remains elusive.
Venus The goddess of love and beauty, entangled in an incestuous act, identified by the golden apple given to her by Paris and by her doves, has drawn Cupid's arrow, who fondles his mother's breast and kisses her lips. At her feet, masks, perhaps the symbols of sensual nymph and satyr, seem to gaze up at the lovers. To the right, foolish pleasure, the laughing nude putto with a lascivious expression dances forward and scatters flowers at them, heedless of the thorn piercing his right foot. Behind him Deceit, fair of face, but foul of body, proffers a sweet honeycomb in one hand, concealing the sting in her tail with the other. On the other side of the lovers is a dark figure, formerly called Jealousy but recently plausibly identified as the personification of Syphilis, a disease probably introduced to Europe from the New World and reaching epidemic proportions by 1500.
Bald, bearded Time at the upper right, assisted by Oblivion at the upper left, draws aside a curtain to reveal the incestuous transgressions of Venus and the adolescent Cupid.
The symbolic meaning of the central scene is revealed to be unchaste love, presided over by Pleasure and abetted by Deceit, and its painful consequences. Oblivion, the figure on the upper left who is shown without physical capacity for remembering, attempts to draw a veil over all, but is prevented by Father Time - possibly alluding to the delayed effects of syphilis.
It is about love and pain, the magical love that kills at the end.
Posted by Miky at 22:04